What's on your mind?

Um, if you guys are still active, how might one who is interested join? I have been a longtime fan of Chima and used to be apart of the original Lego Forums. Would like to participate and I see you guys are somewhat active.

Thanks for any replies.

Hello people of this wiki. I am just now visiting this wiki today and I am very intrigued. I used to watch the show and buy the LEGO products as a kid and I was just looking up something relating to legends of Chima today when I came across this wiki. I must admit that I am a completely clueless when it comes to roleplaying but I see that this fanon continuity is way superior to the official one and would like to learn more about this whole project. I am open to everything. Is there any page with an overview of the fanon timeline/continuity so I can start to get illuminated...

In other words, i’m straight-up leaving the Lego Message Board Eternal becuase I feel like i’m not welcome there anymore. I’m sick and tired of how the moderation is strict and hating me. I’m sure am tired of the shit Roddy has done, as well.

I love you guys for the few years and months you had me, but i made an big enough controversy and contribution to the Chima rp, and, frankly, i’ve done enough for you all, i helped build lore, factions, anything i could’ve have done. Even if it was more or less Half-Life related or anything,

Anyway, since i am leaving, do tell the others about this, becuase even if i did come back for a bloody third time, I won’t be coming back EVER. So, as well as for my characters, you let them decide their fates, honestly, if i had to continue, Scordon Freeman and Spalyx Vance would help the Pheonix banish Scrin to another dimension. The Combine WILL be a major player in the after-rp timeline, being an enemy for both aquatic and land tribes (keep them up.)

The Forgotten are waring with the Tiger’s for control over Senix/Tenebre as a side war to the Southernfell conflict (you may have noticed i had changed to topic name via exploit that got me banned in the first place (among other things). All-in-all, i am NOT coming back to the toxic hellhole that is those LMBE’s, but you guys, you were me best freinds, and if anything, you all understood me (sorta) in a personal way of what we making.

I’m leaving the LMBE’s for good becuase of dumb rules and banning. (Go ta Hell Roddy, and tell Satan, i’m coming for him next!)

My Roleplay Characters are to be handled with care by you guys. (Dr. freeman and bachell are SILENT protagonists, so don’t break their character, please.)

Make sure to keep my storylines intact (they can be subject to change, but hey, whose stopping you?)

And take good care of what i had made for this roleplay.

Oh and just so you know, This isn’t an April Fools Joke, no, this is real. I’m seriously doing this.

Anyway... if ya guys need anything from me the following contacts: 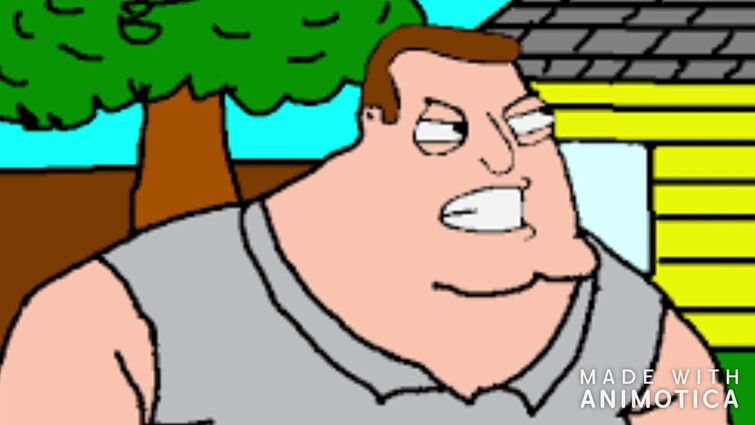 Fighter Plane (unless I'm mistaken, the Sabertoothes, Lions, and Gorillas all have these, and they're basically the same vehicle recolored, so it could be one page)

This is a categorized list of established named characters who don't have pages yet. Anyone can make these pages, but... if you don't plan on writing a full biography for the character, just leave it to me; I don't want a bunch more stubs. :) If I forgot a character on this list, let me know.

Sabran (Not to be confused with Sabrar... heh.)

(I'll be editing this post consistently to remove characters from here after each of them gets a page made.)

Just wanted to let you guys know that there's an update on the Chima community in general, and I'd like your feedback on it (especially on if you're happy going along with this plan). The update can be found here: (link)

Go to the 3 dots in the right corner, scroll down to "All Shortcuts" And type in "All" the first thing you will get is All Pages.

I've made a new and improved version of the Event template! Please use Event 2.0 for all future pages about events (I.E., wars).

Like Egor, i have been banned like him. I mean, whats the deal with the rules?! They are too strict and dumb and the mods and admins are babies! -bursts into luaghter-

Now, i need answers, have the admins and mods notifyed any of you about this back on the LMBE’s? Honestly, i dont care if i have been banned, i can get right back up. I made my mark, my controversial mark, I may be down, but im not out. Oh-ho im so not! One little ban is gonna stop me? Naw, it aint. This just only gives me strength and the will to fight on. If i ever come back, that is... but whatever the case may be, I do need a break tho...

I was sacked as representative, I did not step down! I was exercising roleplay rules, by using my VETO and yet I got sacked for that very reason. Yes I got sacked, and yes that is why I quit.

I got banned, please ask the staff why, I need help.

Well, seeing activity has ceased on the LMBE version of the Chima Fanon RP, I want to know, can we continue it on BRPP? I have set up my topics in this fanon RP subforum. Heres the link if anyone is wondering. thebrickrpportal.proboards.com/board/39/chima-fanon-rp

So if we can get Flippydoodah and Batonmaster, as well as others to join being Ciblast and Emy and others, then it will be good, but how are we going to get to them, thats the question, also you should bring Doc Matt on this as well, Torah. ;) 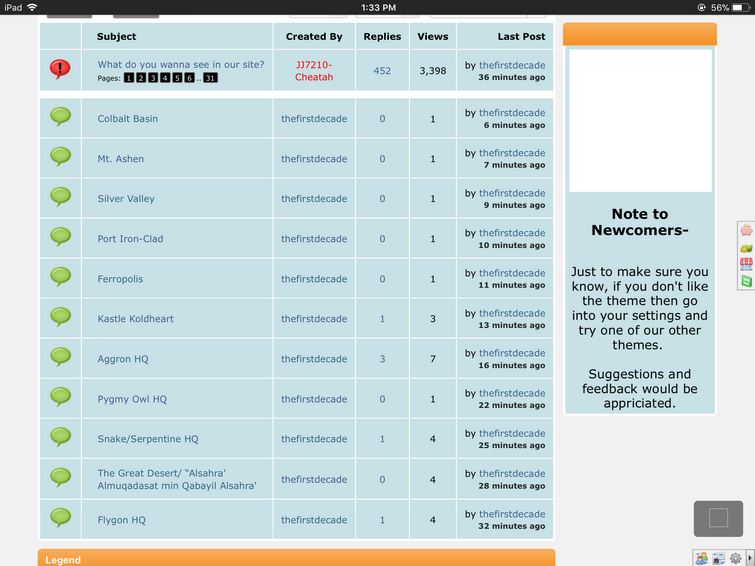 Get an account. Hey torah great to have you here, I recommend you get an account, because otherwise people can find your location, as your ip address is right above: A quick google search (took les than 3 minutes) revealed you lived in Germantown Maryland and your ISP is: Hughes Network Systems so just get an account.

I tried to show this place to Torahvision,but my post got blocked, and the topic where this was revealed got deleted... great... so please campaign and complain to the staff to re open this place

There are 30 articles without the title of All Articles, please tag your posts with the tag: All Articles

Soon, it'll be a new year, and that means new tribes for the Chima RP and its Wiki. Here we can share and discuss our ideas for characters and concepts we're planning to introduce in the RP's third arc.

Please stop putting the category "stubs" on pages, because it is impossible to remove.