LEGO Legends of Chima Roleplay Wiki
Register
Don't have an account?
Sign In
Advertisement
in: All Articles, Locations, Crawler Empire,
and 2 more

Direction on the map

Inside the Scorpion Caverns (East of Cavora)

The Scorpion Cavern Castle is where most of the Scorpions and their tribe lay, being a part of the now-defunct Crawler Empire, it was the holder of operations of the Royal Scorpion Monarchy. It also was was once under Combine Occupation as well during The Uprising, but ever since the recent bombardment of the Bear Tribe, and the bombing from Solrac, it has since been reduced to nothing more, than a Crystal Crater. Being defended by both Forgotten, and Arachnid Alliance. Cave 17 used to surround it with it's large metropolitan area, it's suburbs in other caves are only left.

From this rather large cave, you'll get to see the main Metropolitan area of Cave 17, being surrounding the Scorpion Cavern Castle, and with the imposing Combine Citadel being pretty visible, being behind the main castle. Said castle being made out of a primitive-looking concrete-rock mix. There, you'll be able to see the Main Gate into the Scorpion Cavern Castle, where that cave would lead right into Throneroom of the Castle, that also connects to the base of the Citadel itself. Said gate is decorated with a bust of Scorm's head, letting you KNOW it's his most significant room. In that same entrance, there are side-doors that lead over and out to many rooms inside the castle itself, Significantly, an large armory and garage holding the Tribe's weapons, coveted Stinger Tanks, Speedors, and Various others. 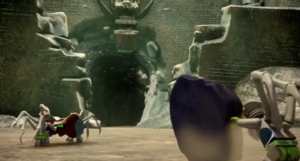 The walls of the Castle Are elevated up on higher rock-faces, but there are separate walls casually siding the entrance into the castle, on those walls lay automated guard turrets, they often require no manning whatsoever, but CAN be controlled manually if need be, the upper walls hold artillery platforms, as well as Combine Suppression Devices as to shell enemies within the city flawlessly, as to not cause too much collateral damage to Civilian Buildings. With Such, The Scorpion Guard is probably one of the BEST in chima, able to stop many a threat before the destabilization via the Forgotten, and the Rebelling Combine as well.

Above the walls and such lay high towers and large open rooms, perfect for giving speeches in, conversing with political officiates and numerous dungeons, and Scorm looooooves his dungeons. Nothing more then the tortured screams of agony and pain fills him with joy and such, and that's a reason why he couldn't love the comforts of his own home as well.

Other notable rooms in the Castle.[]

Community content is available under CC-BY-SA unless otherwise noted.
Advertisement